TO RAISE BASIC LIVING STANDARDS, WE MUST FIRST #RAISETHECAPS

“On Tuesday, the President is expected to unveil a budget that busts through spending caps for defense while slashing domestic investment, which are also critical to our defense. We can’t have a secure nation if our citizens aren’t educated, aren’t healthy, and don’t have access to opportunities.” – House Minority Whip Steny Hoyer 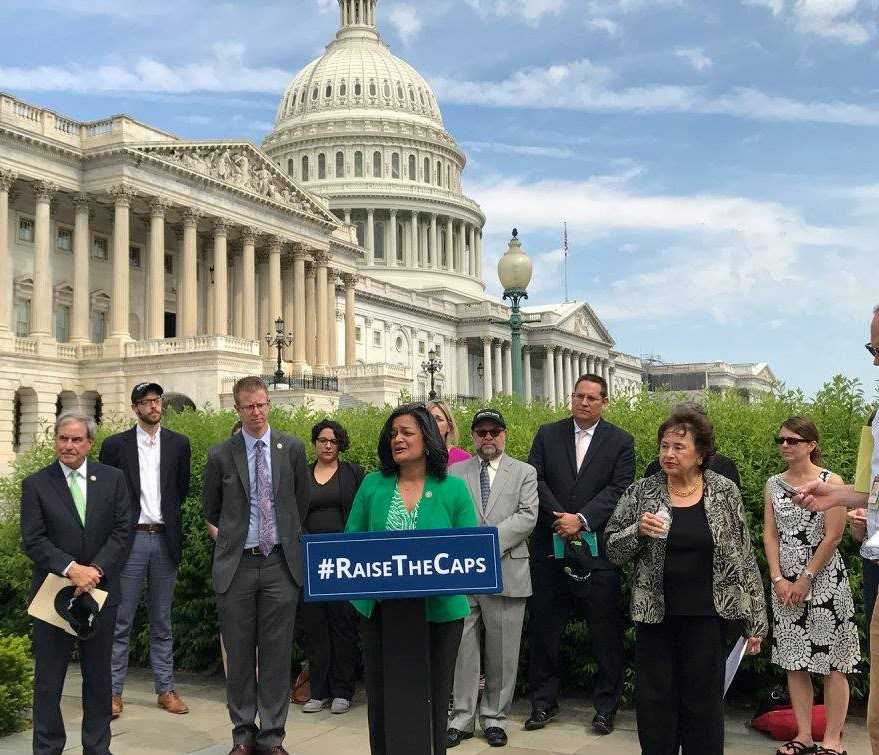 On Thursday, May 18, Democratic members of the House Budget and Appropriations Committees joined advocates in calling on Congress to raise the FY 2018 spending caps so we can invest in programs Americans need to maintain and raise basic living standards. Unless Congress acts soon to undo sequestration cuts that are scheduled to go back into effect for FY18, domestic and international programs will be subjected to billions in cuts. While the spending caps for this category for FY18 are about $3 billion below FY17 levels, a combination of unavoidable cost increases and loss of revenue means $16-$20 billion more will be needed just to stay even with current levels.

As we’ve discussed in previous blogs, President Trump’s FY18 budget proposal outline cut $54 billion below the sequester caps for these discretionary (annually appropriated) programs, including housing assistance and afterschool programs, to give this money to the Pentagon. And a more detailed version of his FY18 budget request, anticipated next Tuesday, May 23, is expected to cut $800 billion over 10 years from entitlement programs that help low-income people, almost certainly including Medicaid, and very possibly also hitting SNAP/food stamps, children’s health insurance, tax credits for the working poor, and income assistance to the poor and people with disabilities. The House GOP budget, due out in June, is expected to cut $400 billion from entitlement programs and include some of the cuts to discretionary programs called for by President Trump. And these cuts come on top of years of shrinking funding for human needs programs.

House Budget Committee Ranking Member John Yarmuth (D-KY) was one of the members of Congress at the press conference on Thursday. He didn’t mince words when it came to calling for a bipartisan budget deal that would reject the cuts President Trump is calling for and instead lift the spending caps to allow for needed investments:

“The current 2018 spending caps are far too low and would leave our country unable to make investments critical to our families, our economy, and our security. Unfortunately, President Trump’s budget blueprint takes us in the wrong direction, cutting even more funding for programs that support health research, environmental protection, housing programs, diplomacy initiatives, and much more. Members of Congress of both parties have the responsibility – and the opportunity – to invest in both non-defense and defense spending, boost economic development, and guarantee that every American family has the chance to build a better future. We’ve raised the caps in a bipartisan manner before, and we must do so again.”

CHN was there at the press conference, along with our friends at NDD United who organized the event. We’re working with them and hundreds of other groups to urge Congress to pass a budget that promotes economic opportunities for all, safeguards and advances our basic living standards, and protects our environment.

As Rep. Pramila Jayapal (D-WA) said on Thursday, “The budget is more than just numbers on a page – it represents our moral values and our commitment to the future of our country….We need a budget that makes us healthier, safer and better off. Now is the time to invest in communities, working families and job growth.”

To paraphrase the speakers at Thursday’s event: to raise basic living standards in our country, we must first #RaiseTheCaps.
Posted by Coalition for Low Income Pennsylvanians at 12:12 PM