No, Young People Aren’t Poor Because They’re Not Married

In his latest op-ed, Washington Post columnist George Will deplores the culture of today’s young people, blaming their disproportionate poverty on the fact that too many don’t get a high school diploma, a good job, and a spouse before they have kids.

Just a minor problem: Literally every aspect of the argument is dead wrong. Today’s young people are more educated than any previous generation, and the share of people living in poverty who have some college education has grown dramatically. Seventy-seven percent of people in poverty have the high school degree that Will claims is part of the golden ticket out of poverty.

Even with those increased credentials and growing productivity, young people still can’t escape poverty because there are not enough good jobs. Unemployment and underemployment have been falling for years, yet the electorate gave a primal scream this past November, imploring policymakers to understand that their communities had been left behind. Take a look at the graph below: Even with unemployment falling, the share of families struggling to make ends meet remains high. Why? If you pay people poverty wages, workers will remain in poverty. Unfortunately, President Donald Trump and congressional Republicans’ solution is that if we simply take away people’s health care to pay for more millionaire tax cuts, that will help people find jobs faster! 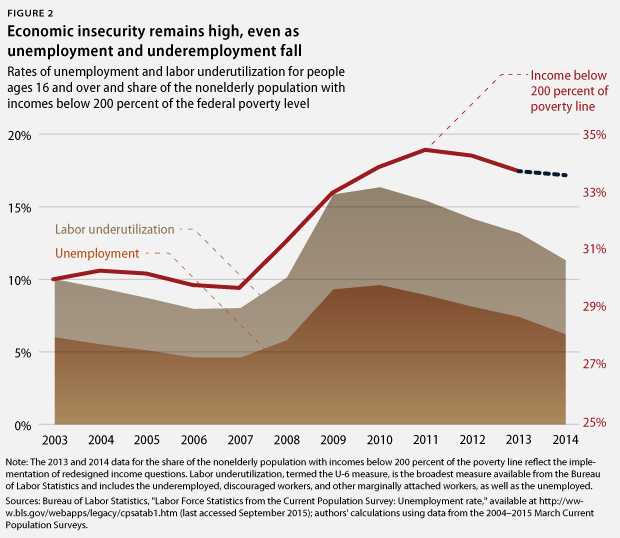 Today’s young people are more educated than any previous generation

Moreover, this overemphasis on marriage can actually have detrimental effects and promote extremely dangerous practices when considering violence committed against individuals—usually women—within partnered relationships. Blindly promoting marriage over programs that support independent financial security—like jobs that pay a living wage or education that’s accessible for all—places even more pressure on survivors to stay in an abusive marriage or partnership.

We all want our children to get educated, work hard, and find partners who will treat them well (if they want partners). But George Will’s column conveniently forgets two things: At the macro level, in an off-kilter economy, where the gains from economic growth are concentrating among the wealthy few, all the hard work in the world isn’t going to change this basic economic reality: There are not enough good jobs for today’s young people, and this has implications for their marriage prospects as well.

At the micro level, life happens. People lose jobs. They get sick or have an accident that leaves them with a disability. They have babies in a country without paid leave or adequate child care, leaving families struggling to afford the basics for their kids. “The poor” aren’t some stagnant group that just needs to make better life choices. Seventy percent of Americans will turn to a means-tested benefit at some point during their working years, because Medicaid, nutrition, tax credits for working families—all the things at risk under this conservative Congress and president—are there for us if we fall on hard times. And most of us will.

Will’s column isn’t just wrong; it resurfaces a dangerous myth at a moment when the basic economic security of millions of struggling Americans is on the line.

Posted by Coalition for Low Income Pennsylvanians at 3:01 PM