CLIP agreed to partner with the Coalition on Human Needs to share important graphics about how the recent Census Bureau data on poverty affects Pennsylvania.  First, a summary:

Too many Pennsylvanians are still experiencing economic hardship.

·       In 2017, 12.5 percent of Pennsylvanians, or 1,548,720 people, lived in poverty. This is a decrease from 2016, when 12.9 percent of the state’s population lived in poverty. The state ranks 29th in percent of people in poverty (with 1 being the state with the highest poverty rate). Nationally, 13.4 percent of Americans lived in poverty in 2017. (Tables CP03, S1701, R1701[1])
·       Children remain more likely to be poor than any other age group. In this state, 17.0 percent of children lived in poverty in 2017, compared to 18.4 percent nationally. The state ranks 26th in percent of children in poverty. (Tables CP03, R1702)
·       8.5 percent of seniors and 20.8 percent of people with disabilities in the state lived in poverty in 2017, compared to 9.3 percent and 20.4 percent nationally. (Tables CP03, S1703)
·       Communities of color are also disproportionately affected by poverty. In Pennsylvania, 24.8 percent of African Americans and 28.7 percent of Latinos were poor in 2017, while the poverty rate among non-Hispanic whites was 9.1 percent. As with adults, children of color experience poverty at higher rates than their white peers. In 2017, 10.6 percent of non-Hispanic white children in the state lived in poverty, while 32.7 percent of African American and 35.7 percent of Latino children were poor. Nationally, 9.6 percent of non-Hispanic whites were poor, compared to 23.0 percent of African Americans and 19.4 percent of Latinos. (Tables S0201, B17020H)
·       743,558 Pennsylvanians lived in deep poverty in 2017, meaning they live below half of the poverty line. Roughly 206,962 children here are this deeply poor. Nationally, more than 19 million Americans, including nearly 5.9 million children, are this poor. (Tables S1701, S1703)
·       The poor are working. In 60.5 percent of poor families in this state, at least one person worked at least part time or part of the year. Nationally, 64.3 percent of poor families had at least one worker. (Calculated from Table B17014)
·       The number of near-poor in our state – those living below twice the poverty line – was 3,509,179, or 28.3 percent in 2017, compared to 31.0 percent across the country. (Table S1701)
·       For the poor and the near-poor, it isn’t easy to afford life’s necessities.
o   Roughly 52 percent of households earning less than $20,000 paid more than half of their income on rent in 2017. The same is true for roughly 41 percent of households earning up to $35,000. National figures are 59 percent and 46 percent, respectively. (Table S1701; Calculated from Table B25074)
o   12.1 percent of households in the state experienced times when they could not afford enough food between 2015 and 2017, on average. Nationwide, 11.8 percent of all households and 30.8 percent of households with incomes below 185 percent of the federal poverty threshold were food insecure in 2017. (USDA Household Food Security in the US in 2017 report)
o   In Pennsylvania, which did expand Medicaid coverage, 5.5 percent of people remained uninsured in 2017, statistically unchanged from 2016, and down 4.2 percentage points from 2013. In states that expanded Medicaid eligibility, the uninsured rate in 2017 was 6.5 percent, compared with 12.2 percent in states that did not expand Medicaid eligibility. (Tables 6 and A-5 of Health Insurance Coverage report) States that push people out of Medicaid by imposing harsh work reporting requirements will cause an increase in the number without health insurance. In Pennsylvania, only 17.9 percent of working-age people with incomes between half the poverty line and just below the poverty line had employer-based insurance, while 64.0 percent had Medicaid coverage. (Table B27016)
·       The Census Bureau’s Supplemental Poverty Measure (SPM) is a more accurate measure of poverty and its changes over time than the official poverty rate noted above. This is because, unlike the official poverty rate, the SPM counts income sources such as federal tax credits and food and housing assistance as well as expenses like out-of-pocket medical costs. The SPM also makes geographic adjustments for differences in housing costs. Using a three-year average from 2015 to 2017, the SPM poverty rate for Pennsylvania was 11.8 percent. In 2017, the national SPM poverty rate was 13.9 percent (Table A-5 of the Supplemental Poverty Measure report)
Federal and state programs work to lift millions out of poverty.
·       Federal programs increase incomes for millions of Americans, lifting them out of poverty and reducing the burdens of poverty for millions more. Nationally, Social Security continues to be the most important anti-poverty program, moving more than 27 million individuals out of poverty nationally in 2017. Across the country, low-income tax credits moved 8.3 million people out of poverty; 2.9 million fewer were poor because of housing subsidies and 3.4 million fewer were poor because of the Supplemental Nutrition Assistance Program (SNAP/food stamps). Supplemental Security Income (SSI) lifted 3.2 million people out of poverty, and the School Lunch Program did the same for 1.2 million people. The Census data show that 10.9 million more Americans would be in poverty if out-of-pocket medical costs were taken into account, showing the importance of quality, affordable health insurance. (Table A-7 of the Supplemental Poverty Measure report)
·       Proposals from President Trump and the majority party in both houses of Congress to cut or add harsh limits on successful anti-poverty programs like Medicaid, SNAP, housing assistance, and others would harm individuals and families and would turn back the progress America has made in reducing poverty over the last several years.
·       In order to help Pennsylvanians who continue to face economic hardship, our state and federal lawmakers should reject cuts to proven anti-poverty programs and reject more tax cuts for the wealthy and corporations that will lead to further losses for needed programs. Instead, they should protect and expand funding for programs including SNAP, Medicaid, housing subsidies and others that lift people out of poverty and invest in our future.

You are free to use these graphics in your work. Please share broadly with your networks. 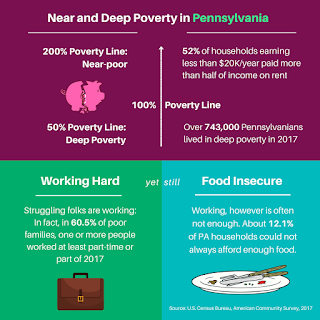 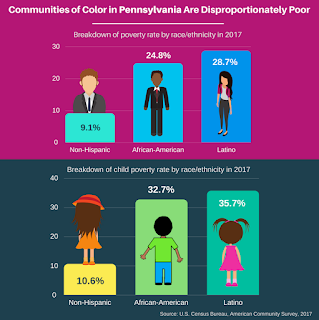 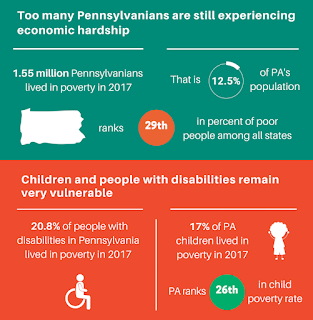 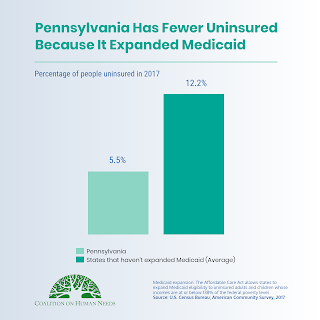 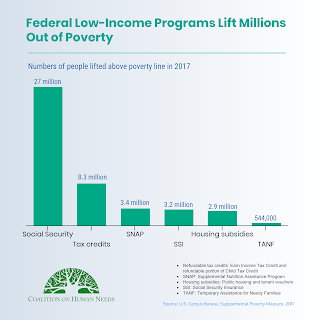 Posted by Coalition for Low Income Pennsylvanians at 11:07 AM